I don’t know about you, but there are certain things on my hard drive that just need to be encrypted. Back in the day (like the days of Windows 98 and 2000), I used PGP to do file and e-mail encryption. It was provided for free from MIT at a now defunct website. Since then, PGP has had a wild ride, both as a piece of software and as a company. It was bought by Network Associates, where it languished and “suffered a near death experience at the hands of NAI.”

Now PGP has been upgraded and has a new home at PGP Corp. But I’m not sure that I’m a huge fan of the new version. I’ve got version 9.6 installed on my machine, but the new interface is a little confusing to me. Things aren’t as simple as they once were. (I guess this can happen when you skip three generations of software–I haven’t used PGP since version 6.5.8 or something like that.)

So I was ecstatic to discover another solution called TrueCrypt that is completely free and open source. Its mechanism is different from PGP’s, but it still accomplishes the same purpose. TrueCrypt enables me to create a file on my hard drive that can be mounted as a separate, secure drive. So even though it’s technically a file, to my computer, it looks like a hard drive. I can store any file on it, and it can be any size I want.

It’s a pretty cool little piece of software, so if you have encryption needs like I do, I’d highly recommend that you look into it.

So I as I was going through my website logs, I came across a trend wherein a particular person at the same IP would always visit my site, open a blog post, and go right to the comment page. They would also visit Andy’s site, specifically his guest book. I noticed that this IP address corresponded with all of the comment spam I’ve been receiving on the site. (I was getting about 20-30 spam comments each day.) Fortunately, it was all caught by Akismet, which is a pretty nifty WordPress plugin for stopping comment spam.

So what did I do as a diligent webmaster and responsible blogger? I blocked the IP address, of course! Since then, the amount of comment spam I’ve received has basically dropped to zero! Amazing! Guess I’ll have to tuck that little tidbit away for future use.

I was going through my site logs today, and I came across a number of interesting discoveries.

So clearly those e-mails had some pretty significant effects on my website traffic. In fact, my average daily website bandwidth is about 225MB. On the 13th, it spiked to 1GB, and on the 23rd, it went to a whopping 3.19GB. Wow! Someone’s downloading a lot of pictures.

The other fascinating bit I discovered was that Kevin is kinda famous. Do a search on Yahoo! for “anaconda vs. python” and he’s the first result. You can also do a search on Google for “biggest living reticulated pythons” and he comes up about 7th, just under the Wikipedia entry. Pretty cool, huh?

This is something I came across yesterday.

Apparently, Rutgers University, in New Jersey, does an annual study on marriage, and the state of marriage in America. I briefly skimmed through the report. It’s 29 pages with a lot of graphs and charts, but it was really interesting to read their findings. I especially liked their Top Ten Myths of Divorce and Top Ten Myths of Marriage.

In our pre-engagement class, we’ve talked about divorce, and how it’s not even an option to be considered or mentioned. We’ve also discussed how the divorce rate for Christians vs. non-Christians is virtually the same if not a little higher. I thought the findings on page 20 of the PDF report were pretty interesting. It talks about risk or success factors in a marriage and suggests that there are a number of things that can increase a couple’s chances of staying together. So in reality, for some large segments of our population, the risk of divorce is considerably below the national average. I think that’s a good thing!

Be sure to check out the Publications section for further reading beyond just the report itself. That’s where I found the two Top Ten lists mentioned above.

On Sunday, I wrote a post regarding Charlene’s baptism. Well, the pictures are now up. Special thanks to Dan B. for being the photographer and taking such great pictures to record the memories.

On occasion, I read Boundless, the college and post-college webzine by Focus on the Family. I happened to take a dive into their archives and discovered an article on love and marriage by Justin Taylor. I thought it was interesting that he took a look at it from the perspective of of the Father of the Protestant Reformation, Martin Luther.

I thought the history was pretty fascinating. I think we have a tendancy to put Luther in the category of those early church fathers who cannot relate to us and have nothing to teach the 21st century student. Quite the contrary, I love the 4 main points that Taylor brings out in his article:

I like point 2, and think it presents the greatest challenge to the modern reader. Our modern concept of love (or at least the Hollywood one) is to gaze across the room and fall in love with the gorgeous or handsome person standing there all without knowing their name.

I like how Martin and Katie challenge that notion by instead growing in their love for each other, knowing that they were forever commited to each other. It goes without saying that divorce was not an option for them.

In the words of our Lord, it is finished! Charlene was baptized this afternoon. It happened a little later than I expected (around 5:30), but it did happen. 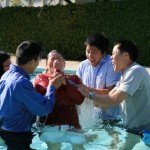 That’s her coming back up out of the water. We were blessed to have all four Cho siblings at the baptism, and Charlene was blessed to have them participate in her baptism.

This is pretty cool. Not sure who has the time to actually spend putting this together, but it’s good stuff for sure.

There’s merely one more day before Charlene’s baptism. Come on over if you’re free tomorrow at 4PM.

I went to my local, friendly, neighborhood Costco today to buy some tri-tip for the barbecue after Charlene’s baptism which is in less than 2 days. Much to my chagrin, there was no vacuum-sealed tri-tip to be found. So I went to the window and asked the butcher. He said they didn’t have any, and may or may not have any tomorrow.

Is there some major barbecue going on that I wasn’t informed of? What’s the deal here? I was just there on Tuesday, and the had cases full of tri-tip. Sheesh…

I guess we’ll go look again tomorrow and see what’s up. Fortunately, if they don’t have any, we have a number of other Costco’s to choose from. I think we’ll hit up the Sunnyvale one first.