I just finished resizing and uploading a whole ton of pictures going back to July. Now I just have to write a little blurb about each one, and I can officially post them. Patience grasshopper, patience.

I’ve had a number of people (family members) ask about pictures from the reunion a couple weeks ago. I haven’t had time to process all of them (you might remember that I shot them all in RAW). And because I’ve been so busy with work, it might be a while. But here’s a preview of the two group shots we took. Admittedly, it’s not my best work. The conditions were kind of harsh, and it started to rain as we were assembling.

I was scrambling to set up my camera, focus it, make sure everyone was in the picture, set the timer, run to grab a spot, and wait for the flash. People had to leave, and it was starting to rain, so we couldn’t really delay taking the pictures. I only got two shots off before it really began to rain, and this was the result. 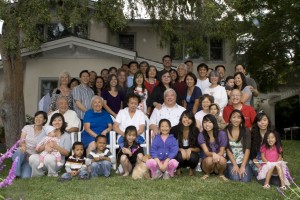 They could have been a lot better. But this will have to do as it’s all I’ve got. If I had to do it over, I would have waited until it wasn’t raining to get a better shot. And I would have made sure that people filled in the edges more.  We’ve got this really tightly bunched pyramid thing going on, and clearly some people were obscured. It’s also obvious that some people didn’t have the concentration to stare at the camera for 10 seconds. Next time, it would be ideal to have a remote or something to trigger it when I wanted it triggered.

I guess the one thing I can say for my family is that it’s quite diverse. Lots of people from lots of different cultures and backgrounds.

Back from LA. It was quite the whirlwind of a weekend. Charlene got to meet both sides of my family in one weekend. Extrovert that she is, she totally loved it. (I would have been cringing in fear.) Also, the baby lover that she is, she totally latched onto my baby cousins. I took a ton of photos, and I haven’t even gotten them off my camera yet. I shot them in RAW, so it’ll likely take me some time to process them before I get them up. So bear with me.

Tomorrow’s my first day of work, wish me luck!

Today is quite the fateful, God-ordained day. It’s the Wong reunion, where people from all over the state of California who are related to me will gather at my cousin Dennis’ house. I’m sure I’ll take a lot of pictures, so check back later.

Charlene and I are flying JetBlue. I’ve never flown them, but my room mate Danvin loves them. The ticket prices were unbeatable as well.  $39/person/destination, so it cost about $160 for our tickets. But I found out that I could upgrade for additional leg room for $20 each, so after taxes, fees, etc. they came out closer to $220. Not bad for roundtrip airfare for two to Long Beach from San Jose.

It’s been over a week since I posted Part 1, and for those of you who are shrewd, I’m sure you figured out how to get the rest of the tips, but for those who haven’t, please enjoy 100 Tips in 100 Days Part 2 from Adorama.

The nice thing about this set of tips is that they’re broken out by week and by topic. Take a look and find your favorites.

Happy Birthday, Mom!  Sorry I couldn’t celebrate dinner with you tonight, but I’m glad we had a chance to yesterday. I’m also glad I got to spend a few days with you and dad. See you this weekend!