A few holidays ago, we made Garlic Prime Rib. It was really tasty.  Last year, I found the food blog Serious Eats, and their Perfect Prime Rib. I haven’t actually made the Perfect Prime rib recipe, but the science is sound.

For Christmas this year, I’ve decided to combine the best of both worlds: the flavor of the Garlic Prime Rib, and the cooking method of the Perfect Prime Rib.

So I present to you, the Perfect Garlic Prime (Thyme) Rib. 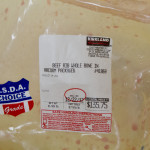 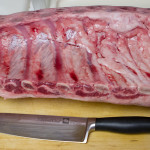 Fresh from the package 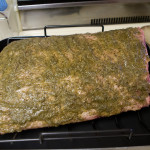 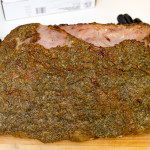 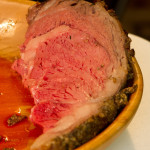 (Astute observers will note that the package says nearly 17 lbs. We didn’t serve the entire thing. I cut off one rib to save for another time, for reasons explained below.)

And here’s the recipe:

Overheard during Christmas at ALCF…

I love deviled eggs. Growing up, my parents weren’t fans of the “deviled” moniker, so we called them “Angel Eggs.”  I could go either way, but I totally understand that for most people to even have the faintest idea of what I’m talking about, I have to refer to them as “deviled.”

In any case, I had a company potluck yesterday, and Charlene had the inspired idea to do Bacon Lover’s Deviled Eggs with bacon, cheddar cheese, and scallions.  Mmm… 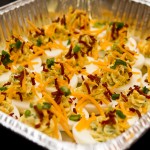 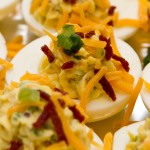 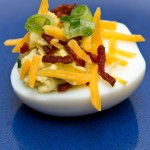 It’s been about two years since I posted my original recipe for my chocolate chip cookies.  Since then, I’ve begun the move to preferring metric and mass measurements over imperial and volumetric measurements.

So with that change, along with further refinements I’ve made over the past two years, I’ve decided to update the recipe. Enjoy! 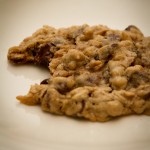 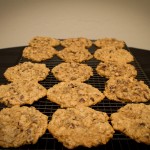 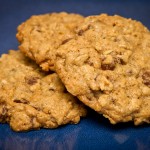 I’ve decided to start moving from Imperial and Volumetric measurements to Metric and Mass measurements in my cooking. (Though technically inaccurate, some people refer to measuring mass and weight interchangeably. I’ll try to be as accurate as possible by referring to measuring mass, but please forgive me when I slip up.) Why? Because it’s much more accurate, it’s far simpler, it’s easy, and it’s different.

It’s more accurate because as this article on measuring indicates, things like a cup of flour can vary in mass from 4 to 6 ounces.  That’s bound to make a difference when you’re measuring out several cups of flour for bread or pizza dough.  Weighing your flour is much more accurate.  200g of flour is always going to weigh 200g.

It’s easy because if you ever need to double or halve your recipe, it’s all a matter of multiplying or dividing nice round numbers by two.  If the original recipe wants 500mL of water, and you double it, you’ll end up with 1000mL, or one liter, of water. But what happens if a recipe wants 2 cups of water, and you double it? Sure, you could measure out 4 cups of water, but you could also measure out 1 quart of water as well. But it gets worse. What if the original recipe asks for 1 tablespoon of water, but you halve it, you’d end up with either half a tablespoon, or 1.5 teaspoons of water. Who has time to remember all these dumb conversions??? How about we move to metric, and make every unit only a simple move of the decimal place away from any other?

The one caveat I’ll give is that there are some things that just don’t make sense to measure by metric or mass measurements.  Here’s a few examples: