I went to Costco today and bought over eighty pounds of meat for a friend’s wedding.  About 56 lbs of tri-tip, and 26 lbs of chicken.  Sorry, there’s no pictures of the chicken, but they would have been boring anyways.

56 pounds of tri-tip is by far the most tri-tip I’ve ever bought.  I look forward to breaking that personal record one day.  Here’s what 56 lbs of tri-tip looks like: 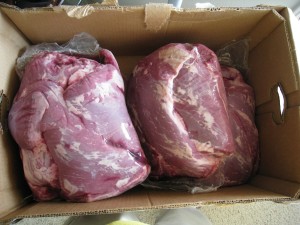 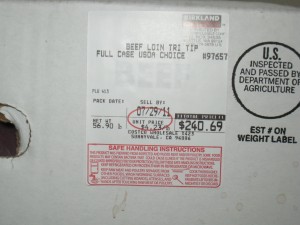 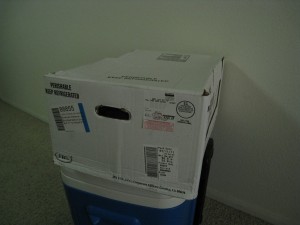 Liu Bolin is a Chinese artist who has seemingly perfected the art of disappearing into the background.  I think my favorite is the first one in front of the soda aisle.  But I think he blends in the best with the dump truck.  I didn’t even know he was in the picture at first glance; it was his hair that gave it away.  It needed to be more orange.

According to the NY Times article, it takes several hours to setup a shot, and they use paint and makeup to blend him in on site. I can’t imagine standing still that long, especially in the heat and humidity of Beijing.  Hope he does his shots in the winter. 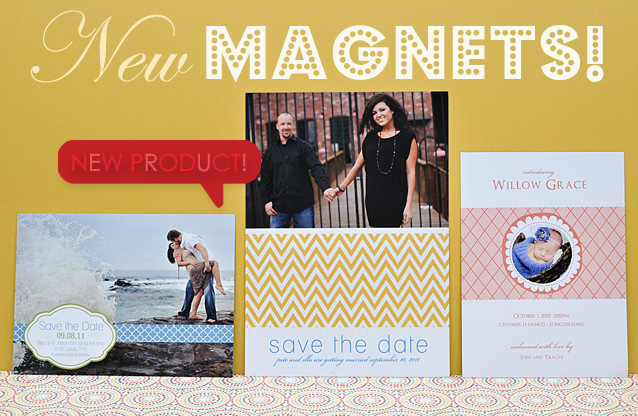 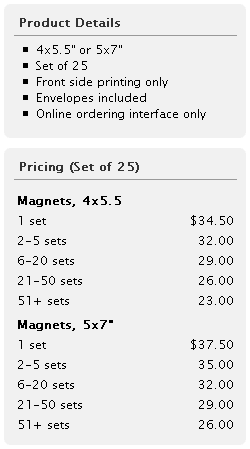 And they’re priced fairly reasonably, starting at $34.50 for twenty-five 4″x5.5″ and going down as you order more.  They even include the envelopes!

I also love the fact that the tool used to create them comes with some pre-defined templates to help you get started, or you can just upload an image of the correct dimensions, and create the card from that.

If you don’t mind “beta” software, are a Windows 7 user, and you convert your camera’s RAW files to the Adobe DNG format, then this “release candidate” DNG Codec is for you.

The DNG Codec provides a method for Windows 7 customers to view DNG files in the Windows Explorer and Photo Gallery.

The biggest downside, in my opinion, is that it doesn’t offer support for OSes prior to Windows 7. Then again this is 2011; I suppose we should all be on the latest and greatest OS, unless you count this one.

If you’re new to photography, particularly cameras with “advanced” controls like aperture/shutter priority or manual mode, then this Camera Simulator might be helpful to you.  It shows the various effects that lighting, distance, focal length, ISO, aperture, and shutter speed have on a photograph.

. It’s a fantastic book and classic Scott Kelby. In Chapter 2, Scott makes the case for using flags over ratings or colors to sort photos.

On his blog, Matt Kloskowski, agrees and elaborates. He gives us 3 (and a half) Reasons to Use Flags Instead of Ratings in Lightroom. It was enough to convince me.

If you’re a Lightroom user, check it out, and see if you’re convinced.

I’m just beginning my foray into using Lightroom as a part of my photography workflow.  One nagging issue came to a head this afternoon, as I was trying to sort through some photos.

For some reason, the count of photos in the toolbar wasn’t counting all my photos.

I couldn’t figure out where the three missing photos had gone.

Fortunately, a search on the Adobe Forums turned up this article. And then I realized that because I had some photos stacked, they weren’t available to be selected. Unstacking them then allowed me to select all 144 photos:

So there you go! If for some reason, Lightroom won’t let you select all your photos, check to make sure they’re not stacked.

Scott Kelby and Matt Kloskowski have a great series of 100 videos on why they recommend Lightroom over Bridge and Camera Raw.

Check it out!  I was sold after watching the first video.

And you get all that in a small package for the retail price of $899.  In many respects, it’s quite similar to the Canon 7D I have my eye on right now.

Digital Photography Review has a preview of the camera, so I won’t reiterate everything here. But it definitely is an interesting proposition.

Yesterday, I posted about the new release of the Canon EOS-1D Mark IV. It’s a pretty nifty, new, pro-grade Canon camera. It was announced on 10/22, and won’t be available until December. As I mentioned yesterday, this one does 16.1 megapixels at 10 fps, and shoots full 1080p video.

As was the case with the 5D Mark II, Vincent LaForet got a sneak preview of the camera, and was able to make an updated video, Nocturne, in the style of the original, Reverie. Unfortunately, the video has been taken down at Canon’s request. Hopefully it will be back up again soon. LaForet describes the camera’s night functionality thusly: “pointing my light into an area in complete shadow (my eye saw nothing but black) but on the rear of the LCD I saw sharp, green leaves as crystal clear as if it were shot in daylight…The short film you are about to watch was shot in pretty much the very worst light that I could possibly find in an evening urban landscape.  I did not chose “pretty lighting” in a mall or under neon signs.” Looks exciting.

Most likely, I’ll never be able to afford one (in case you didn’t notice, this sucker is $5,000), especially if Charlene and I ever hope to be home owners. But it’s cool to see Canon continuing to build great products.