And you get all that in a small package for the retail price of $899.  In many respects, it’s quite similar to the Canon 7D I have my eye on right now.

Digital Photography Review has a preview of the camera, so I won’t reiterate everything here. But it definitely is an interesting proposition.

Yesterday, I posted about the new release of the Canon EOS-1D Mark IV. It’s a pretty nifty, new, pro-grade Canon camera. It was announced on 10/22, and won’t be available until December. As I mentioned yesterday, this one does 16.1 megapixels at 10 fps, and shoots full 1080p video.

As was the case with the 5D Mark II, Vincent LaForet got a sneak preview of the camera, and was able to make an updated video, Nocturne, in the style of the original, Reverie. Unfortunately, the video has been taken down at Canon’s request. Hopefully it will be back up again soon. LaForet describes the camera’s night functionality thusly: “pointing my light into an area in complete shadow (my eye saw nothing but black) but on the rear of the LCD I saw sharp, green leaves as crystal clear as if it were shot in daylight…The short film you are about to watch was shot in pretty much the very worst light that I could possibly find in an evening urban landscape.  I did not chose “pretty lighting” in a mall or under neon signs.” Looks exciting.

Most likely, I’ll never be able to afford one (in case you didn’t notice, this sucker is $5,000), especially if Charlene and I ever hope to be home owners. But it’s cool to see Canon continuing to build great products.

Like many people, I was both thrilled and dismayed last month. That’s when Canon announced their Spring Lens Rebates. But it had barely been a week into the rebates when retailers like B&H and Adorama decided to boost the prices of lenses across the board. That meant a lens like the EF 70-200mm f/2.8L IS USM which was about $1700 prior to the rebate, and $1500 after a $200 rebate immediately jumped up to $1600, effectively cutting the $200 rebate in half to $100. That doesn’t make it a complete wash, but it definitely diminishes the utility of a $200 rebate.

So I was interested to read the commentary by Roger Ciala, President of LensRentals.com. In it, he shares a few really good points and observations:

Great commentary, and worth the read, especially if you were in the market for a new lens like I was. For the time being, I think I’ll sit this one out.

Well, it’s official. Canon has announced the Canon EOS 50D. Frankly, I don’t see it as a very compelling buy right now.  That’s not to say it doesn’t have some nifty features, but just that I don’t see them as necessary, or aligned with my current priorities.  It does have more megapixels (15.1), and the new Digic 4 processor.  Apparently, the ISO is expandable to 12,800 but that’s only compelling if the quality doesn’t suck.  In a first for Canon, they have a full 3″ VGA screen with 920,000 pixels (compared to the 40D’s 3″ with 230,000 pixels). That’s impressive, but is full VGA really valuable on a 3″ screen?  Back in the old days, it was enough to fill a 13″ or 15″ monitor.

Somehow this announcement escaped me. Canon had a relatively major product announcement on July 8 (so I’m only 10 days late to the party). But they made an announcement for 2 products:

I’m still trying to figure out the deal with the Rebel XS. As I previously commented on the release of the XSi, the new product name basically sounds like “Rebel Excess,” and I guess I’d have to agree with the name. This new SLR does seem like “Excess.” With the new Rebel XS, Canon’s count of 10.1 megapixel cameras goes to 4. We’ve got the EOS-1D Mark III, EOS 40D, Digital Rebel XTi, and EOS Rebel XS. Of course, I recognize that the Mark III is in an entirely different camera from the Rebel XS; they’re not even in the same league. But to the average consumer, who only compares megapixels, I think Canon’s really shooting themselves in the foot.

Taking a quick look at the specs for both XS and XTi reveals that they are almost identical. The XS even comes in silver and black, just like the XTi. The only two differences I saw were that the XS loses 2 AF points, so it only has 7 instead of the XTi’s 9. But it does get LiveView. I don’t really see either of these as major features.

This seems like quite a wasteful release. In some of the forums I’ve read, others seem to agree. Their question is when will Canon do a refresh of the vernerable 5D. It’s a relatively old DSLR, having been announced in August 2005. And I tend to agree with them. Canon should be putting forth more engineering effort to do a 5D refresh than it should, filling out its lower end DSLR line with one more camera.

Maybe if we’re lucky, Canon will bow to our requests and do a 5D refresh sometime this year.

Costco has the Canon 40D on sale right now, and they’re even throwing in a 4GB memory card for free. It’s the body only, so you’ll have to spend some additional Benjamins to get a lens. But that is a pretty good deal to me. B&H has it for $939.99, but they don’t include a memory card. Amazon.com

has basically the same deal as B&H–no memory card. If I was in the market for a 40D, Costco’s deal would be pretty tempting.

As a follow up to the last post, B&H has another article on Tough Point and Shoot Cameras. I’ve known for a while that Olympus has pretty weather/water resistant cameras, so it’s no surprise that they come into the running with two cameras in this article.

B&H has a great article on “Cameras & Lenses That Can Take a Lickin’” and it covers a number of cameras and lenses that are weather proof, or at least weather resistant.

I may be a biased Canon guy, but I was impressed that they described the Canon EOS 1D Mark Series by writing, “Over 70 silicon seals and gaskets block moisture and dust from entering most every cutout on the camera body, which is constructed of a composite of magnesium-alloy and carbon fiber materials for an optimized weight/strength ratio.” They describe it as “an all-but-bulletproof camera.” Pretty nifty. I’d like one myself, but at $4100 to $8000, they’re a little out of my price range.

May 18 through July 19, Canon is offering a number of rebates on their SLR gear. The rebates certainly aren’t as good as the double and triple rebates that have been offered in the past, but they are something. I’m also a little disappointed that there are no rebates on a 10-22mm lens that I was thinking about getting. But maybe that’s for the best since I don’t really have the cash to spend anyways. Come to think of it. I don’t think they’ve ever had a rebate on that lens.

There is a pretty sweet rebate on the 40D. other than that there isn’t anything earth shattering, at least not in my opinion. But take a look below, and judge for yourself. 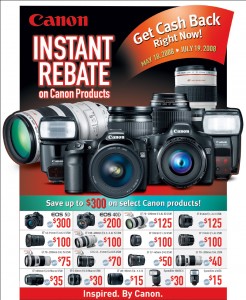 I guess the whopping 21.1 megapixels of the relatively new EOS-1Ds Mark III aren’t enough for some people. Apparently, Nikon might be brewing a 24.4 MP DSLR, and Sony is also looking at a 24.6 MP beast.

Seems kinda nuts to me. I don’t know what anyone would do with all those pixels. That’s not to mention where they’re planning to store all that data. I mean, even with my 10.1 MP Rebel XTi generates ~3.5 to ~4 megabyte pictures (JPG). If I shoot RAW, that number more than doubles to almost 10MB.

People are definitely going to have to shell out the cash for some 16GB cards or something. And even then, those are going to fill up pretty darn quickly.

Nope…I’m pretty satisfied with the 10 megapixels I’m getting out of my camera. As far as I’m concerned, unless you’re going to plaster the side of a building with your picture, the megapixel wars–like their predecessor, the megahertz wars–are pretty much over.