I’ve been working on WordPress sites a lot lately.  The other day, it was Charlene’s blog.  Today, it was the CCF Alumni Foundation website, of which I’m the Chairman.

Since the early days of the web, I’ve often used the JavaScript Enkoder form by Hivelogic to obfuscate my e-mail address in order to protect it from spammers.  The problem is that because it’s based on JavaScript, it’s not super-compatible with WordPress pages and posts.

Fortuitously, I ran across a PHP plugin version written specifically for WordPress.  It’s called PHPEnkoder.  So now, any plaintext e-mail addresses as well as any mailto: links on the website are now automatically encoded using the Javascript Enkoder.  Fantastic!

This is what my e-mail address looks like when it’s been “enkoded.”

The other problem I solved this afternoon was the implementation of a prayer requests form for the CCFAF.  It’s built on Google Docs technology, which I then embedded using an <iframe> into the WordPress post.  The problem wasn’t creating the form, that’s easy enough.  The problem was figuring out how to get notified each time the form was filled out.  But I ran across this article, and now we should be good to go.

Go try it out!  When someone fills out the form, I automatically get an e-mail notification.  Then I can either pray for it directly, or have someone from the Board pray for them.  Excellent!  Technology at its finest: serving the Kingdom of God.

Scott Kelby and Matt Kloskowski have a great series of 100 videos on why they recommend Lightroom over Bridge and Camera Raw.

Check it out!  I was sold after watching the first video.

As any good IT professional will tell you, it’s extremely important to perform backups on a regular basis.  Until this point, I’ve used a combination of network backup to Charlene’s computer and online backup with Mozy.  Until this point.

On Monday, Mozy announced the discontinuation of their $4.95/month unlimited backup plan. It’s being replaced with a new set of backup plans that will make it significantly more expensive for me to do business with them.  I’m talking a price increase of nearly 900%.  This is simply unacceptable to me.

Needless to say, I’m on the hunt for a new backup provider. At this point, I’m seriously considering either Backblaze or CrashPlan.

I don’t know either company personally, but I do know the persona Backblaze portrays on their blog, and I like what I see.  They seem like a very genuine and sincere company. I like the fact that they’re very open about a lot of things, including their infrastructure and a bit about their encryption strategy for keeping data safe. They were even community-oriented enough to ask their users/readers for input on their new offices. I like it!

CrashPlan is a bit more of an enigma to me.  They do have a blog, but it’s nothing special.  They do seem to be getting rave reviews on Twitter, so that’s a good sign.

PC Magazine points out that neither company is very old, though CrashPlan is more established than BackBlaze.

I guess we’ll see what happens. I’ve gotta do some more digging before I make a decision.  I really hope this is the last time I have to re-backup my files.  Backing up 400+GB over the internet isn’t very fun.

A couple of weeks ago, the Gmail team released a cool new feature in Gmail Labs called Sneak Peak. It lets you take a sneak peak at your e-mail without actually opening it.  Cool stuff!  I’ve already enabled it in my Gmail. 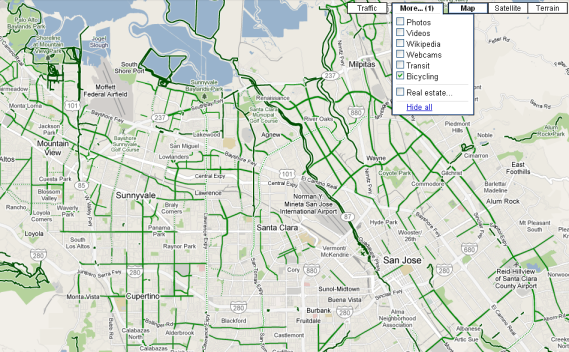 My dad loves biking.  For his birthday and Christmas, he usually requests a hike, or a bike ride with his family.  And now Google is happy to help him out because Google does bike trails. From the Google Maps “More” menu, it’s possible to pull up a bike paths overlay.

You can also plan a point-to-point trip by bike, and it will route you on the most bike friendly path.

It looks like there is some information on Bakersfield where my parents live.  But it is a tad sparse.  I’ll bet they add more information as time goes on.

There is, however, a plethora of information for the Bay Area, particularlythe South Bay where I live. Maybe I’ll have to dust off my bike and get out and ride, especially since the weather is getting better.

I thought Peter Belanger wrote a pretty interesting article on what it takes to produce a cover for Macworld magazine.

Play the classic game pong with your browser window…literally:
http://stewdio.org/pong/

I was rummaging through some old e-mails when I came across this picture. It’s been over a year since the picture was taken, and I thought it was appropriate to post. So here’s the story.

It was my first week at PrimitiveLogic. They threw me right into the fire, and off to Workday Training. Workday was founded by Dave Duffield, former CEO, Chairman, and Founder of PeopleSoft which was acquired by Oracle a few years ago.

One day, as I was crossing the street from my car to the office, I came upon an older gentleman carrying a paper bag.

“Are you Dave Duffield?” I asked.

I was stunned. I introduced myself, told him I working for a partner consultant, Primitive Logic, and that I was in the office for Integration Fundamentals training.

We talked as we hopped into the elevator. I asked him what was in the bag, and he said that they were bagels he had found on sale. He had to go a few floors further than me, but as I was stepping off the elevator, he spoke up.

“Here, why don’t you take these bagels to your class?” he said as he offered me some of the bagels from his bag.

“Thanks.” I replied with a bit of hesitation.

As I got off the elevator, it hit me: I was just given bagels by one of the richest people in America. In fact, he’s #347 on the Forbes 400, coming in with just about $1.1 billion.

In any case, the wealth doesn’t seem to have gone to his head. He’s a super down-to-earth kind of guy. And heck, he gave me bagels!

Dave, the pleasure was all mine.

Intel has a really great high-level overview of what it takes to make an Intel processor. If you’ve ever wondered, here are the pages and the pictures to help you out.

Here’s an interesting article on why HD Video Downloads don’t look so great. Apparently, “hi-def” isn’t a really well regulated or defined measure of video quality. When you have bit rates that range from 1.5-40 megabits per second, it’s easy to see why there’s a range in quality.