I was rummaging through some old e-mails when I came across this picture. It’s been over a year since the picture was taken, and I thought it was appropriate to post. So here’s the story.

It was my first week at PrimitiveLogic. They threw me right into the fire, and off to Workday Training. Workday was founded by Dave Duffield, former CEO, Chairman, and Founder of PeopleSoft which was acquired by Oracle a few years ago. 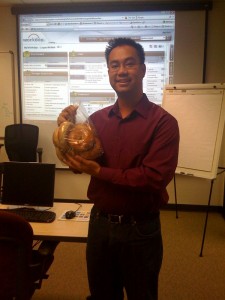 One day, as I was crossing the street from my car to the office, I came upon an older gentleman carrying a paper bag.

“Are you Dave Duffield?” I asked.

I was stunned. I introduced myself, told him I working for a partner consultant, Primitive Logic, and that I was in the office for Integration Fundamentals training.

We talked as we hopped into the elevator. I asked him what was in the bag, and he said that they were bagels he had found on sale. He had to go a few floors further than me, but as I was stepping off the elevator, he spoke up.

“Here, why don’t you take these bagels to your class?” he said as he offered me some of the bagels from his bag.

“Thanks.” I replied with a bit of hesitation.

As I got off the elevator, it hit me: I was just given bagels by one of the richest people in America. In fact, he’s #347 on the Forbes 400, coming in with just about $1.1 billion.

In any case, the wealth doesn’t seem to have gone to his head. He’s a super down-to-earth kind of guy. And heck, he gave me bagels!

Dave, the pleasure was all mine.

My retirement location of choice has made it to #8 on the List of Best Places to Live 2009. SLO how I miss you.

It’s definitely still on my list of goals to retire in SLO. Hopefully before I’m old and gray. But God-willing, that’s where Charlene and I will end up one day. 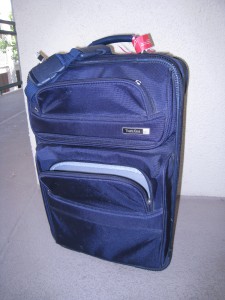 I said good bye to an old friend last week. My trusty blue Travel Gear carry-on was finally on it’s last legs wheels. It actually broke in during our honeymoon to the Bahamas. Unfortunately, that meant that for the remainder of the trip, I was forced to stoop down to lug my luggage. Charlene was gracious enough to pull it for me. It was easier for her to drag around since she’s shorter than me 🙂 Once we got back, it took me a few months to find a replacement. It was replaced by a Chaps Varsity Elite 21-in. Expandable Upright (the Navy blue one with orange highlights).

But it was quite a sad story. We were in the Atlanta Airport waiting for our flight back home to the Bay Area.I had the handle fully extended because I was pulling it along behind me. But when we stopped and I tried to make it retract, it wouldn’t go down. I tried squeezing the release mechanism and pushing to no avail. (Apparently, the mechanism holding it up was stronger than the mechanism that let it down.) I was beginning to get a bit nervous because I needed that handle to retract before boarding. No flight attendant in her right mind would let me on with luggage that didn’t compact fully. So as things got desperate, I notice that there were screws in the handle portion.  I decided to unscrew the handle from the top and see if that would make it retract. As luck would have it, it worked! I got the handle to retract, and it was clear that the mechanism was broken. Sad day 🙁

That blue piece of luggage went everywhere with me since I was in college. (Full Disclosure: Truth be told, I basically commandeered it from my mom’s collection of luggage.) I took it to Bakersfield when I went home on the weekends. It went on a number of trips to Tucson. And it was my trusty friend during the crazy days of traveling for Accenture. It went with me to Chicago, Cincinnati, Raleigh/Durham, Kansas City (KS). And back before I entered the work force, it went with me on my epic trip to China. Take a look.

In any case, it was a sturdy and trusty piece of luggage for the years I had it.  I just hope my new bag lasts as long as this one did. If it doesn’t, I might have to go back to Travel Gear (which is really quite inexpensive) or upgrade to the golden standard of travelware: Tumi. I’ll miss this friend dearly, but I’m really looking forward to putting miles on my new piece of luggage. 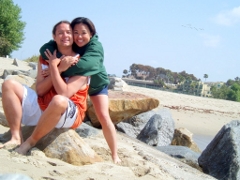 Charlene and I are headed off to Tiff and Don’s wedding tomorrow morning. We’re driving from SLO to Orange County/Irvine. Long trip, but looking forward to seeing everyone in the family.

Congratulations, Tiff and Don. I guess that’s one less Ms. Wong in the family 🙁 But a new cousin-in-law added 🙂

Charlene and I have a really packed weekend. We’re heading to SLO for the CCF Alumni Reunion BBQ. Sunday morning, we’re leaving the CCFAF festivities, and heading down to LA/Orange County for Tiffany and Don’s wedding. Monday morning we wake up super early, and catch a flight out of Long Beach back here to the Bay Area. So fortunately, we have most of the day on Monday to rest and relax. But it’s going to be craziness.

I’m just glad that for the next two weekends after that, we’re taking it easy. Praise God for rest!

On the other hand…

I’m not worried at all about the weather in the Bahamas during our honeymoon. It looks to be a nice balmy mid-70s climate for the next week or so. 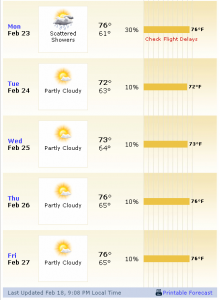 I’m pretty confident that it’ll stay that way.  And even if it rains, I’m sure it will be one of those nice, warm, tropical rains that always happen in Hawaii (that’s the only reference point I have for tropical climates, I’ve never been to any other tropical climate).

Back from LA. It was quite the whirlwind of a weekend. Charlene got to meet both sides of my family in one weekend. Extrovert that she is, she totally loved it. (I would have been cringing in fear.) Also, the baby lover that she is, she totally latched onto my baby cousins. I took a ton of photos, and I haven’t even gotten them off my camera yet. I shot them in RAW, so it’ll likely take me some time to process them before I get them up. So bear with me.

Tomorrow’s my first day of work, wish me luck!

I’m headed home today so that I can do Mom’s Pampered Chef party. My only hope is that we do enough in sales for me to make it worth the cost of gas to drive down there. Of course, it’ll be worth it if mom gets a bunch of free stuff, too. In any case, it should be fun, and I think we’ll all have a good time.

Dan and I are going up to SF tomorrow to take pictures of the Golden Gate Bridge at sunset.  I’m really excited.  People who know me know that I’m not a huge fan of The City, but I guess for the opportunity to shoot the Golden Gate, I’ll do it.

This should be a very relaxing weekend. I’m looking forward to a very chill time with Charlene and friends from Real World. We’ll be going to New Brighton State Beach with Real World, so if you’re available, sign up on the Evite.

We’re bringing watermelon, and having pizza delivered for dinner. Come join us! We’ll be showing up around 4PM. See you there!