A while back, probably close to a year ago, our teaching pastor, Pastor Hurmon Hamilton came and spoke to the Men’s group at church. He was challenging the guys to step up and be the men that God called us to be.

The topic of what he shared was based off of Genesis 3, sometimes appropriately known as “The Fall of Man” chapter. Pastor Hurmon shared three insights from this passage:

He then shared three questions:

And three admonishments: Speak up. Show up. Step up.

It was a great way to start off the year. Looking forward to a great 2013!

Charlene and I got back from the 7th Annual ALCF Marriage Retreat this afternoon.  It was awesome! Milan and Kay Yerkovich were the speakers, and they were great. They shared on the topic of “How We Love Intimately”. My goal is to write more extensively about the weekend over the course of the next week.  But the gist of what they shared was that we are all affected by the events of our childhood, and certain “wounds” or “injuries” we suffer as children have a radical impact on the way we connect and bond with others, particularly our spouse.

Understanding those wounds and their effects can empower us to work on them, and transport us to a place where we are better able to connect with our spouse physically, emotionally, and spiritually.

Charlene and I had a great time, and we were pleasantly surprised to find a number of familiar faces at the retreat with us. If you go to ALCF, I highly recommend that you attend in 2011. 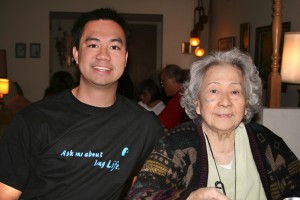 I’m not entirely sure how to handle this. Is it even kosher to write such a post? I guess at the end of the day, I’m hoping that writing will serve as a cathartic experience for me and for my family.

I got a phone call from my mom yesterday afternoon.

I doubt that I’ll ever forget those words.

We’ve all known for a while that my Po Po was not doing well.  She had a minor stroke on October 18, nearly two weeks ago. But since it was a minor stroke, I think we all figured she’d pull through. But some where along the line, she caught pneumonia, and I think that’s what will really take her from this life into Heaven.

My conversation with my mom was brief, but the gist of it is that the pneumonia was catching up to her, and her lungs were filled with fluid from the infection. She is rapidly approaching her last days here on earth. The doctors gave her the option of going to the hospital in hopes of curing her, or going to hospice/palliative care.  They recommended that she go to hospice as another trip to the hospital, with all of its associated tests and procedures, likely would have killed her.

She told my Gung Gung that she wanted to go to hospice and that she was ready to meet God. I think that’s the attitude we should all have.

I’m not sure why I didn’t post this last night.  I should have, but forgot.  Oh well.

There are six things the LORD hates,
seven that are detestable to him:haughty eyes,
a lying tongue,
hands that shed innocent blood,

a heart that devises wicked schemes,
feet that are quick to rush into evil,

a false witness who pours out lies
and a man who stirs up dissension among brothers.

Words to the wise: these are things that we should do everything to avoid. After all, who wants to do what the Lord “hates” or finds “detestable”?

Bummer. I’m so stinking far behind, it’s not even funny. I’ll have an update from Proverbs 18 tonight. I promise.

For more information on what this is all about, read my post on Proverbs through October. Then join me on my journey through Proverbs, and leave a comment so I know you’re with me.

Dishonest money dwindles away,
but he who gathers money little by little makes it grow.

He who spares the rod hates his son,
but he who loves him is careful to discipline him.

Since we were or unwilling to go to the (not so) Great American Food and Music Festival, Charlene and I headed to a place that comes highly recommended by the people of Mountain View: Clarke’s Charcoal Broiler.

I was aware that it had been nominated a few times for the best burger for a few years, but when we got to the store, they had posters going back at least 10 years. Pretty spectacular if you ask me. I got the chili burger, and Charlene got the turkey burger. Mine was quite tasty and definitely had a smoky, charbroiled flavor. Unfortuantely, I have to say that I’m still on the lookout for a chili burger better than the one at Johns Burgers in Bakersfield. I think the downfall of this burger was that they used processed (American) cheese rather than cheddar on top of the chili. I wasn’t looking for plastic cheese on my food. I was looking for some delicious, sharp, aged cheddar. But I digress…the burger was still delicious, just not better than Johns.

Charlene’s turkey burger was alright a bit dry to my taste. As far as turkey burgers are concerned, I think the best one I’ve ever eaten was actually at Red Robin. It’s juicy, flavorful, and a wonderful substitute to a regular beef burger. It certainly fills up those empty spaces.

Anyways, I look forward to trying other burgers at Clarke’s. I’ve heard they have a pretty good avocado burger. We’ll definitely have to make another trip there in the future.

I know this is old news by Internet standards, but it’s only been a few weeks since I discovered this fantastic SmugMug interview by Robert Scoble. He takes his camera into SmugMug’s offices in Mountain View and interviews Don MacAskill regarding (what was at the time) brand new features in SmugMug. Take a look.

While I object to the title of the article (She’s not an “abortion foe.” What a polarizing and inflammatory title!  Can’t she just be a supporter of pro-life?), I’m glad that someone decided to write last week about Mary Ann Glendon.

Glendon is a conservative Harvard law professor who was U.S. ambassador to the Vatican under President Bush. Notre Dame announced that it would be awarding her the Laetare Medal during commencement on May 17.

Since then, Glendon has chosen to decline acceptance of the award. Her reasons are quite simply that President Obama, a staunch supporter of abortion, will be giving the commencement speech. Glendon cites the U.S. Conference of Catholic Bishop’s “express request of 2004 that Catholic institutions ‘should not honor those who act in defiance of our fundamental moral principles’ and that such persons ‘should not be given awards, honors or platforms which would suggest support for their actions.'”

I’m greatly encouraged to read that in the past two weeks or so, we’ve had three strong examples of people standing for what they believe in spite of the consequences. Carrie Prejean, Rich Snyder, and Mary Ann Glendon, I salute you and your desire to hold fast to your convictions. 2 Timothy 3:12 promises

In fact, everyone who wants to live a godly life in Christ Jesus will be persecuted.

This may only be the beginning, but let us not forget the admonition of our savior:

I may not agree with everything that Glendon stands for, but I do applaud her for standing in support of her own beliefs regardless of the outcome. May we all be more like her.

After an amazingly restful honeymoon, Charlene and I are back in the states. Pictures and stories to come in the following days.